How Fifty Shades of Grey made it into our library.

It's been a while so I'll probably need to confirm some history with the internets, but the first I'd heard of Shades I'll call it, was when a library patron called to request that we get a copy for her/him (don't remember whether it was a him or her).

I did a quick compooter search and did not see any reference to the book. At all. I saw some fanfic references and comments, but I did not find any published novel with that title. (As you read this post, you'll learn that there existed a 50Shades.com website and a print-on-demand book; not sure if I found the site and ignored it or just never saw it. I wasn't keeping notes, not even mental ones.)

Then about a week later, maybe more or less, a request came for an inter-library loan for Shades and I answered how we were unable to get it because it wasn't currently available to us.

How were so many people learning about this book in December 2011? I want whoever was in charge of that marketing campaign to work for the library.

The library often gets requests for self-published books. These are books we won't (except in rare instances) buy for the collection. The reasoning for this is often the high cost and low demand. There are also purchasing issues because those books aren't available from our usual vendor. So getting those books means arranging a one-time payment with a small press or even an individual person then paying for shipping and separate processing, all things that our usual vendors provide because of the high volume of our orders. FYI, many libraries have procedures for accepting self-published books if there is some perceived demand. Before Shades was published, public demand for self-published books at our library was uncommon and so we had no real plan to purchase them. It was very very rare that we did.

When the third or fourth request came in and I checked online for it, suddenly there was a book for sale on Amazon. I think it was $40. And it looked like it was from a vanity press and I think the publisher was in Australia (this was the same print-on-demand title mentioned before). But it was Amazon and that made it available. So at this point there was a book. But it wasn't from a vendor where we had any relationship with and it was $40. The odds the library would be able to get it was still at a realistic 1,000 to 1.

But the book beat those odds. Because we learned we had thousands of patrons who wanted to read it.

We were able to order a few copies even though we have no formal purchasing agreement with Amazon. Mainly because of the outrageous demand for it. People requested it at every branch. I have an email that shows how many requests we had before the book was ever published in the USA as a paperback. As soon as we were able to order from Amazon and added the information in our catalog that the book was on order, we had over 1,000 library card holders request a hold for it.

I wish I could go back to the end of 2011 to see the progress of the online demand for it: I mean, was it popular on Facebook or just through people emailing each other about it? I don't know. But it seemed like it was only a few months between that first request and the arrival of the juggernaut.

According to "The Lost History of Fifty Shades of Grey"


"This erotica bestseller began as a work of Twilight fan fiction called Master of the Universe, earning a massive fan fiction following years before the book deal. Most traces of this fan fiction history have been removed from the Internet."

Now if you remember that Shades was originally posted as Twilight fan fiction, and that the Twilight series had just been a super-massive publishing monster, then the number of people reading the original posting of Shades on the internet could have been in the tens or hundreds of thousands or readers. Given the explosive demand for Shades while it was originally only available as that $40 paper edition on Amazon, the readership of Twilight fanfic must have been tremendous.

I remember having those thoughts when I was researching the book online. How the hell do people find out about this stuff?

But another issue goes back to the people who requested the book before it was even a mass published book for sale. Who are these people? The knee-jerk people who call the library and request something that doesn't exist (as I said before, it existed. I'm making this statement as if I'm remembering from February 2012). Because they were calling in 2011. If you know about the history of Shades, then you know it lived online in 2010, so that whole year could have produced that fan base. So what may have seemed as sudden and knee-jerk behavior to me could just have been a year's worth of sexual frustration.

I see from the Adweek article (previous link) Shades was available from The Writer’s Coffee Shop Publishing House back in June 2011, and this would have been at least 5 months before I'd gotten my first request for it. So call me a bad librarian for now knowing about this book in December 2011. But as it wasn't showing in the holdings of any library that I could see and that it wasn't even on Amazon at that time, it was invisible to me. Maybe if I'd been a fan of Twilight, I'd have known.

By March 2012, the monster was here. And we had lots of copies. If you have any memory of Shades from 2010 or 2011 or even pre-March 2012, maybe you can share what your library did in those early months before the storm. Or even how you decided to buy or not buy it for your library. Any story is worth preserving. 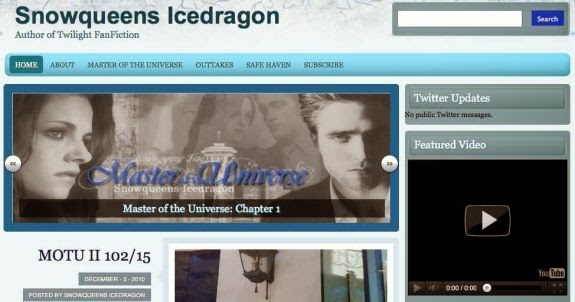 Posted by the.effing.librarian at 8:45 AM No comments: