Facebook is the reason you don't have a job.

I've blamed Facebook for the Decline of the American Empire before, but I have an entirely new reason today.

American companies are not hiring because you have too much free time. When companies look at all the time their workers are spending on Facebook, the clearest picture they see is that their employees don't have enough to do. And if the current American workforce can afford to spend hours a day on Facebook, then why should any company create more jobs?

And don't go telling me that Facebook is great because your mom uses it and she's retired, so how could the economy be screwed up because of all the retired people who use it?

Fuck you. 700 million people are using Facebook, so yes, your mom story is a great example to refute my theory. 699,999,999 other people don't matter. Facebook isn't valued at $50 billion because your mom uses it.

If you don't believe me, look at the fucking chart: 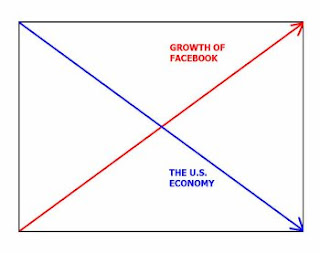 But ever since THE INTERNET became a thing, companies have been able to see a much clearer picture of the habits of Americans and it turns out that we don't slave away at making more and more money for our billionaire masters as they think we should.

After all, so few Americans farm their own food. And slightly more than that a few grow weed or cook crank or whatever those magicians do to make illegal drugs. So the rest of us are lucky that anyone is willing to give us any money at all for the little work that we do.

I mean, ask Apple why they took their manufacturing to China and the answer would be "an unlimited supply of cheap labor who will work any time we say, for as long as we require and never takes time off to take their cat to the vet."

Before computers started talking to each other, your boss could only guess at how much time you were wasting while she was providing you with the means to support a home and a family, two cats and a dog.

But now the cat is out of the bag.

Because you had two cats. And you tried to sell one to the butcher by disguising it as a pig. But the butcher knows to never buy a pig in a poke. So he let the cat out of the bag and exposed your fraud.

Let me get off topic for a second because Snopes claims that this explanation is False, simply because the author doesn't believe that anyone would mistake a cat in a sack for a pig. But yet, the author accepts the "pig in a poke" phrase for exactly the same reason, that some unscrupulous merchants would sometimes substitute another animal when you purchased livestock, so you should always look at what you're buying before you conclude your transaction. The author accepts this origin, but doesn't think that what was in the poke/sack/bag would ever be a cat. Definitely not a cute, fluffy little cat. So let me restate, But now the squid is out of the bag.

There is no job that you can have that your boss can't find someone else to do it: better, as well, nearly as well, or with a minimum level of competence, FOR LESS MONEY THAN YOU.

Even in the library, I could FIRE EVERYONE and still provide library services well enough that most of your customers wouldn't care. Volunteers would line up to have SOMETHING TO DO to fill their otherwise wasted time. And some of those people would be very qualified to fill library positions. EVEN FOR NO MONEY. BECAUSE THIS IS THE NUMBER ONE RULE OF BUILDING A WORKFORCE: if you can fill their most basic needs, there will always be someone to take the job.

I absolutely believe that Americans are about one step away from rounding up people to do a job then killing them before payday. Again. Because we've done this in the past.

I'm always surprised by people who think that since we learned to be civilized, to have civilized society, that it's here to stay. Like you get it and it's with you forever. Like herpes. When civilization is more like genital warts. Civilization will often spontaneously rise up within cultures, but it can be beaten back with a proper applications of ointments. And gunfire.

So Facebookians, stop fucking up this country. Every computer knows every minute you waste and they share that information with each other. Every day you spend screwing around online is another minimum-wage job-that-will-never-be. Each wasted month equals one blue-collar job. And every three months equals one white-collar job that doesn't get budgeted over to HR.

If you really need to kill time, read a book. But not an ebook because they spy on you there, too.

Posted by the.effing.librarian at 7:00 AM