Congratulations, you're an idiot. Here's your diploma.

I still haven't read anything that proves that the "Augmented Reality App for Shelf Reading" is worth considering for any library. If you haven't seen the video, the app runs on a tablet with a camera and as you point the camera at a shelf of books, the camera scans the 2D codes on the spines to tell if the books are in order.

Wait. 2D codes on the spines? Yes, you have to add another label to each book in your library. All, 200,000 of them. Or 10,000. Or 3 million. What does it matter, it's another label someone has to apply to the book spine. A label that probably won't work on a book that's thinner than .75 inches.

So you scan the shelf and the books are marked with green checks if in order or a red X if not. And then an arrow points in the direction where the out-of-place book needs to be moved.

And then you scan again until the shelf is in the correct order.

And this is faster than teaching the student how to read the call number. (???)

It also doesn't explain what to do if the book is completely in the wrong place and on the wrong shelf. Does the arrow point behind me or up the next floor?

So my guess is that the student pulls the books from the shelf that can't be fixed by the app and puts them on a cart for someone else to shelve: that one kid who actually knows the LC system. And then the first student closes the Shelf Reading app and starts playing Abduction!

So instead of learning the shelving system, the student learns... nothing. Remember, this is a Digital Native®. He can't be bothered to learn something that isn't intuitive (to him) or doesn't require casting spells or collecting gold or keys or the rote memorization of Xbox attack combos.

So now we have a potential library school student who won't know the call number classification system used in his library.

But let's see if that's a deterrent to getting a library job.

Here is what I imagine the job interview for a typical Digital Native® would be like:

Library HR: I'm sorry, you have a doctorate in library science?How did you get your MLS?

Digital Native®: I made a video that was viewed 3 million times. It was a parody of that song? I forget. But we danced around and it was awesome. Sorry, I mean, epic. Or sick. Oh, whatever the hell we kids are saying these days.

Library HR: And your doctoral research was in which subject?

Digital Native®: Viral Marketing. I wrote an app. It was downloaded 1.5 million times.

Library HR: What was the app?

Digital Native®: It was in protest of the HarperCollins ebook policy of only allowing 26 downloads for libraries. It was an image of the CEO of HarperCollins, Brian Murray And when you tap his face, he farts. It was downloaded 1.5, um, right now, 1.7 million times. It was featured on Jimmy Fallon.

Library HR: As much as it pains me to say this; congratulations, you're hired. 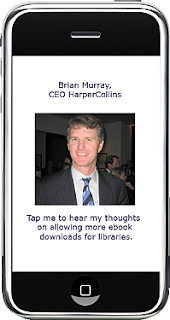 Now downloaded 1.8 million times!
Posted by the.effing.librarian at 9:09 AM